Scholastic Fencing League offers the highest-quality fencing instruction.  Maestro Wes Glon and Coach Tom Strzalkowski have a combined 60-plus years fencing experience, and a passion to share what they have learned with the next generation of fencers.

Learn About
Our Program 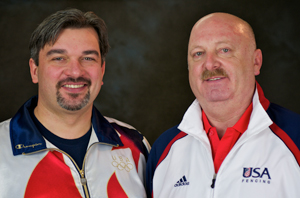 Maestro Glon has coached the U.S. teams for the Junior and Senior World Championships (1990-93), the Pan American Games (`91) and the Olympic Games (`92 and `96).  In 1996, Maestro Glon was named Co-Coach of the Year by the United States Fencing Coaches Association.  As a competitor, Maestro Glon won his country's (Poland) highest fencing honors in saber six times between 1975-81. He won a bronze medal at the 1979 World University Games in Mexico City, finished fourth in Romania in 1977 and seventh in Bulgaria in 1975.

Maestro Glon is in his 28th season with the Nittany and Lady Lions, and joined the Penn State fencing program as assistant coach in 1985.  Maestro Glon is now the associate head coach at Penn State University where he coached the team to 12 NCAA Championships.   Prior to immigrating to the U.S., Maestro Glon assisted with the Austrian National Team in Vienna.

Coach Strzalkowski began his coaching career as a volunteer coach at Penn State.  He was an assistant coach at the United States Air Force Academy from 2002-2008 and opened the Fencing Academy of Denver in 2010 where he is the owner and head coach.  Coach Strzalkowski has coached young fencers who went on to represent Penn State, the University of North Carolina, Vassar, Drew University, University of California – San Diego, the University of Notre Dame and the United States Air Force Academy.

Our instructors have completed the Maestro Glon Method of Fencing.

The Benefits of Fencing

All fencers wear steel mesh masks, gloves, chest protectors and padded jackets, and the weapons they use do not have sharp edges. Fencing is considered safer than most other sports.

Fencers are of all different ages, sizes and body types. A key component of fencing is mental agility, so you don’t have to be a world-class athlete to learn. This is a family sport.

What Does
Fencing Promote?

Does My School
Have A
Fencing Program?

If you attend one of the above schools, we already have an after school program operating. Don't see your school?

Find out how to bring fencing to
your school here.

Warning: Unknown: Failed to write session data (files). Please verify that the current setting of session.save_path is correct (/home/scholast/public_html/files/tmp) in Unknown on line 0